Assist. Prof. Dr.Dr.h.c. Sunčana Roksandić Vidlička, received an honorary doctorate (doctor honoris causa)  in 2019 at East European University, Tibilisi, Georgia for her work and activity related to "the responsibility of transnational corporations and other business enterprises for breaches of human rights."  She is a sholarship holder of the Foundation Marija i Mirjan Damaška for her postdoctotral research (2019/2020).

Born in Zagreb where she finished elementay school and attended Gymnasium (Gymasium for classical languages).  She graduated in the USA. She obtained her Master of Science Degree in Company and Commercial Law at the Faculty of Law, University of Zagreb (2011) and graduated at the same Faculty of Law (2000), all in top 3%.  After graduation, she worked seven years in legal practice, first as as he legal trainee in the law firm Bogdanovic, Dolicki & Partneri later as legal adviser to Croatian Medical Chamber. For her work in Croatian Medical Chamber she has received a special recognition - an award for the contribution to the development of the Croatian Medical Chamber (2005). She passed Croatian bar exam.

She is the Head of the Croatian Unit for the International Network of the UNESCO Chair in Bioethics and a member of UNODC Anti-Corruption Academic Initiative. She was a member of the Max Planck Partner Group for Balkan Criminology (2013-2019) and the external member of the Otto Hahn Group of the Max Planck Society: Architecture of the Security System (ArchiS). She was the head of Jean Monnet Project Advanced Seminar in EU Criminal Law and Policy (2016-2019) and (co)founder and (co)director of the course under same name that is held every year at the InterUniversity Center Dubrovnik: http://euclp-sem.eu/. She co-edited the book as a result of collected papers from the JM Advanced Seminar "Dealing with Terrorism": https://www.duncker-humblot.de/en/buch/dealing-with-terrorism-9783428157990/?page_id=0&typ=buc . In addition, she is an invited lecturer at the Geoffrey Nice Foundation Course, since 2017.

Sunčana Roksandić Vidlička acts as an expert in national, regional and international projects (e.g. UNODC, UNDP, Max Planck Institute for Foreign and International Criminal Law, Global Initiative Against Transnational Organized Crime)  and as national expert in the implementation of EU directives ( e.g. Victims' Rights Directive and Forth Anti-Money Laundering Directive).  She is serving as a regional expert on transitional justice issues, primarily corruption and economic crimes. She is a head of University of Zagreb Project: Research Network in Transitional Justice (since 2019).

She is a member of the Management Committee of COST Action: CA18228 - Global Atrocity Justice Constellations and serves as STSM Coordinator (2019-2024).

Of project's financed from the Croatian Science Foundation (HRZZ), she participated as a researcher in the project „Multidisciplinary Research Cluster on Crime in Transition –Trafficking in Human Beings, Corruption and Economic Crimes“ and is currently reseacher in the project „Projekt nedužnosti u Hrvatskoj“ (Innocence project; CroINOP), all headed by prof.dr.sc. D. Derenčinović.  She serves as a head of the Project of the University of Zagreb: Research Network of transitional justice“ (2019/2020).

She is one of the model course drafters and developers of UNODC (E4J) in the area of peace, corruption and security (first drafter). In 2018 she received the acknowledgment Education for Justice (E4J) Champion,  for teaching University Module on Integrity and Ethics. She was a member of Working Groups of Ministry of Justice drafting Law on Protection of People with Mental Disabilities (full member) and Criminal Code (external member) and president of the Working group of ministry of health on unifying provisions of informed consent. Currently she is a memeber of the Working Group of the ministry of justice on monitoring the implementation of the Law on Protection of People with Mental Disabilites  and  a Member of the National Risk Assessment Group on the Risk of Money Laundering and Financing of Terrorism in Croatia, Government of Republic of Croatia (2018- (second evaluation), 2013-2014 (first evaluation). In 2017 she was a (co-) rapporteur for AIDP on the topic individual criminal responsibility of businessman for international crimes. In 2019, she was invited speaker at the Side Conference held during Assembly of States Parties to the International Criminal Court in The Hague on the special panel: The prosecution of economic and financial crimes: new mandate for the ICC or creation of a new international criminal court?

In 2011 she received the Annual Award for the best young scientist in social sciences by the Society of University Professors and other Scientists of the University of Zagreb. In 2015, she was selected for the USA International Visitor Leadership Program "Women Countering Violent Extremism."

She has published, besides Croatian, in English, Croatian and German, primarily in the areas that interlink the protection of  human rights with (international) criminal law and in the area of transitional justice, business and human rights, primarily health and economic ones. She participated as a keynote and invited participant in many national, regional and international conferences and workshops and (co)orgnaized the same (e.g. World Congress in Medical Law (2010), Countering violent extremism (2015). The list of her publications is available online: http://bib.irb.hr/lista-radova?autor=301401. She is also active in blogs, the latest on COIVD-19 and international response: https://justice-360.com/virus-terrorism/

She is member of the Executive Board of Croatian Association for Criminal Law Sciences and Practice and is part of Editorial Board of Zagrebačka Pravna Revija. Besides, she is member of  (inter)national criminal law and criminology associations: European Consortium for Political Research (ECPR),  AIDP, Association of University Professors and Scientists in Zagreb and external member of the Academy of Legal Science in Croatia. Since 2020, she has been a member of the International Chamber of Commerce (ICC) Commission on Corporate Responsibility and Anti-corruption (Croatia).

She participated (won 2nd place, Bassiouni's moot in international criminal law) and (co)coatched moot court teams (UN Model Law, ICC Moot, Price Media Law) and serve as judge in national, regional and international competition (ICC Moot, Regional Price Media Law, and regional Human Rights Moots). She was a founder of the Group of Protection of Patients rights at the Legal Clinic of ther Faculty of law and serves as academic mentor. Through her work in Legal Clinic, she was one of the intiators of the Law on the Rights of Victims of Sexual Violence during the War in Croatia (passed) and the Law on damage compensation for HIV infection (never passed). 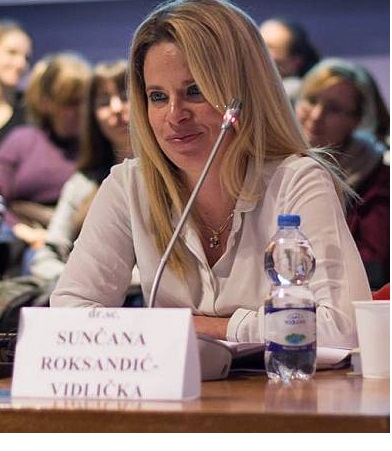 Bioethical and Legal Challenges of Artificial Intelligence and Human Dignity

Hate crimes in Republic of Croatia - the problems in practice and the importance of effective investigation ; case law of the ECHR

Is it human to make mistakes as a physician?

Corruption as a national and international crime ; Connection between Corruption and Security

Transitional Justice and the Western Balkans: Interplay between Justice, Rule of Law and Security

Challenges of the provisions of the Law on the protection of peple with mental disabilites: informed consent and relevant case law of the ECHR

“Prosecuting Serious Economic Crimes as International Crimes – A New Mandate for the ICC?

Transitional Justice as a Method of Attaining Constitutional Values: Analysis of the European Court of Human Rights'Case Law and the Constitutional Decision in Case Hypo

Six Years of the Application of a New Criminal Code and the Legal Continuity of Abuse of Power in Business Dealings (Art. 292 CC/97): Interpretation of Abuse of Trust in Economic Operations and Tax vasion or Customs Evasion

Establishing ICC Jurisdiction Over Crimes Committed by ISIL – Did Humanity Fail the Countries of Syria and Iraq?

Dealing with Terrorism: Empirical and Normative Challenges of Fighting the Islamic State

Abuse of Social Networks in Public Incitement to Violence and Hatred and in the Spreading of False News:the Need for the Transposition of the German Act on Improving Law Enforcement on Social Networks?

Corruption as an International Offence

Implementation of the EU Vicitms Directive

Victimology and Victim Protection in Croatia

A legal response to today’s reality: economic crimes as crimes against humanity

DNA and Innocence Projects in Croatia

Environmental law and economic criminal law: enhanced tools to protect environment against climate change: What could we learn from the US: the example of ExonnMobil

"Failing to disclose” and climate change: environmental or economic crime (case of ExxonMobil)

Law and Justice: how to win a case in front of international courts

Legal protection of older persons (including elderly with mental disorders) from the Croatian perspective: why we need a special UN Convention on the rights of the older persons

Prosecuting Serious Economic Crimes as International Crimes: A New Mandate for the ICC?

Filling the void: the case for international economic criminal law

“Innocence Projects” and Subsequent DNA Testing in Croatia : a Possible Reality or an Unattainable Desire?

NATIONAL REPORT: CROATIA DEVELOPMENT OF ECONOMIC CRIMES AND ANTI- CORRUPTION POLICIES IN TRANSITIONAL PERIOD AND ITS CURRENT DOGMATIC BASE AND PROVISIONS

Medical malpractice and the case law

Where medicine meets the law

Role of digital evidence in prevention of terrorism

The role of digital evidence in the European Agenda on Security

White collar crime in Croatia and its impact on economic competitiveness

Transitional Justice Measures and Application of Law for Economic Crimes in Croatia: What Can Macedonia and Balkan Countries Learn Out of Them?

The Relevance of Asset Recovery Policies in Transitional Societies: The Croatian Perspective

Transitional economic crimes and corruption: The time for a new step

Informed Consent of Children in the Croatian Legislature

Medical experiments on human beings as crimes against humanity

The rights of unborn child and ECHR

Experiments on human beings as a crime against humanity : From Nürenberg Medical Trials to Pfeizer

Croatian transition without justice: Sanader Case: What has Croatia omitted and what could still be achieved?

Medical experiments on human being as crimes against humanity

Protection of patients in the palliative health care system

The relevance of asset recovery policies in transitional societies: the Croatian persepctive

The Commentary on the Law on Protection of People with Mental Difficulties with Implementing Regulations, Examples of Court Decisions, International Documents and European Court for Human Rights Judgments

The imprescriptibility of economic crimes in the transformation period in Croatia

Right to confidentiality of data protection

Victims of sexual violence in war and restorative justice: the experience of Croatia

Establishing (transitional) economic offence as the crime under international law - utopia or reality?

DNA and the Protection of privacy through Criminal Law

Recent changes in the development of the statute of limitations in Croatia - in the wake of political instrumentalization or means for achieving justice?

Commentary of the Criminal Code

No status of limitation for criminal offences against war profiteering and crimes committed in the process of ownership transformation and privatization in Croatia - Does it achieve goals of transitional justice?

Bioethical and legal challenges of surrogate motherhood in Republic of Croatia

Informed Consent of Children in the Croatian Legislature

Application of Criminal law on doctors' of dental medicine

Croatioan medical law in the light of European standards

Ethical Dilemmas of Criminal Policy Regarding the End-of-Life Decisions

Book of Abstracts of the 18th World Congress on Medical law, Zagreb, 2010

Book of Proceedings of the 18th World Congress on Medical Law, Zagreb Croatia

Rules of professional conduct of physicians

Historical development, current place and role, and need for a re-definiton of activities of ethics committees in croatian hospitals

Rules of professional conduct of physicians

Principles in contract conclution in Republic of Croatia- does contract with Croatian Institute of health insurance has all needed elements?

Organisation of services for voluntary HIV advising and testing

Health Rights of the Elderly in the Republic of Croatia