Zoran Burić graduated magna cum laude at the University of Zagreb Faculty of Law in 2007. The same year he started working as junior researcher on the scientific project Criminal Law Aspects of the Accession of the Republic of Croatia to the European Union at the University of Zagreb Faculty of Law. From 2009 he has been employed as assistant lecturer, and from 2016 as assistant professor at the Department of Criminal Procedural Law at the University of Zagreb Faculty of Law. From 2011 he is the executive editor of the scientific journal Zagreb Law Review. He has been a reseracher in several international (Bridging the Gap: Civil Society Promoting Access to Justice for Persons with Mental Disabilities, EuroNeeds, Pre-trial Defence Rights in Criminal Proceedings) and national (Judgments of the European Court of Human Rights againt the Republic of Croatia in Criminal Matters, Targeted Early Victim Needs Assessment and Support - TEVNAS, Strengthening the Rights of the Suspect and the Accused in Criminal Procedure in Croatia) research projects. He wrote his PhD with the title Models of Cross-Border Evidence Gathering in European Union Criminal Law, within the procedure for an international joint doctorate based on a agreement between the University in Zagreb and University in Freiburg. He has conducted a significant part of his doctoral research at the Max Planck Institute for Foreign and International Criminal Law in Freiburg, Germany. He is the author and co-author of several articles that cover the area of criminal procedural law, European Union criminal law, human rights in criminal proceedings, comparative criminal justice, rights of victims of crime, and psychiatry and law. 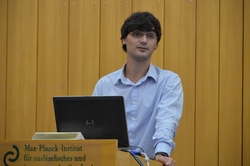